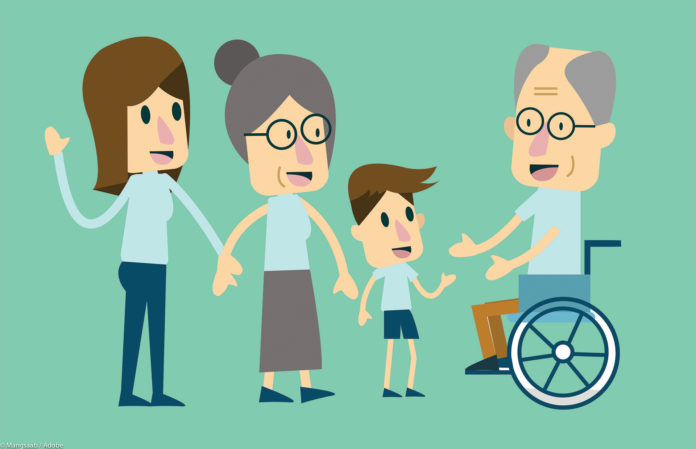 I remember when I became an official member of the sandwich generation.

Two and a half years ago my father was taken to hospital and not expected to last the night.

We all live with the knowledge that our parents aren’t going to be around for ever, but nothing can really prepare us for the phone call setting it out in black and white.

“His lungs have had it,” my mum told me in a strangely calm and matter-of-fact manner.

“They don’t think they can do anything for him.”

I remember sinking down to my knees, hardly able to breathe let alone process what I had just been told. I was 42, a single parent, and I needed my dad.

As it happened, the UK’s marvellous NHS did manage to do something for him, and two weeks after that hideous phone call, and during one of my twice daily visits to the hospital, I was told I could take him home.

And from that moment on, everything changed.

As a single parent, I’m used to wearing several hats at once; being mum, dad, breadwinner, cook, cleaner.

My son, Will, is now 15, but despite what the childless or those without teens might think, he needs me more than he has ever done. We are entering his GCSE years. He wants more independence.

I’m constantly on-call to drive him places, pick him up. To gently steer and advise him. To mother him in a hands-off way.

And at the same time, my parents need the same kid-glove approach, so along with navigating a teenager through their most tumultuous years, I feel like I am also parenting two wilful, stroppy toddlers who can’t be reasoned with, and who are prone to sudden rages and rash outbursts.

My dad is 84 and has a vast array of health problems including chronic obstructive pulmonary disorder and heart disease.

He is in cardiac failure, can’t walk more than a few steps, and has badly ulcerated legs.

For a man who worked from the age of 11, and was always active and on the go, his physical decline is now also destroying him mentally.

My mother, who is 80, has survived throat cancer and a stroke, but has other ongoing issues, including, as she puts it ‘living on my nerves’.

Although they manage on a day-to-day basis, tensions are high – they are both stressed and frustrated, and fully aware that their needs are constantly becoming greater.

My mother attends to all my father’s personal care, and a nurse comes in several times a week to dress his legs. He leaves the house only to go to medical appointments.

Fortunately, I live nearby and can be there quickly if there’s a crisis. But in many respects, my close proximity makes it all the more stressful.

I’m now dividing the enormous guilt we all feel as mothers between my son and my parents.

If I am too busy with work or my son’s needs to squeeze in a visit on any given day, I feel terrible. If I go out, I worry about them trying to get hold of me urgently, and me being too far away to get back to them.

I sleep with two mobile phones and the landline next to my bed in case they need me in the night.

I am constantly on edge and waiting for something (disastrous) to happen. Every day brings a new problem; some of them just what you expect from elderly parents – computer woes, miscommunications, scenarios rising out of general confusion.

But then there’s the more serious stuff; prescription drugs going missing, medical appointments being missed or refused, the awful role reversal situation of the child (me) telling the parent what is best for them and what they have to do.

There are rows – between them – often. Borne out of frustration and loss of control.

I remain calm and impassive in the face of it; the mediation sessions I was forced into after my relationship break-up have at least served some purpose, equipping me with ‘neutral’ phrases, open-ended questions and no-blame solutions, but despite always holding it together in front of them, there have been countless times when I’ve got back into my car and sobbed all the way home at the awfulness of it all.

And I know they worry about how I’m coping, too.

My mother wants to pay for me to go on holiday, but I make excuses about work when the truth is, I would worry endlessly being miles away and something happening at home.

I confess I do, too, and some days just desperately want someone to hold my hand and stroke my hair and tell me it will all be OK

Their desire to see me ‘settled down’ seems to have increased in the past couple of years, too – their greatest wish is to see me in a stable relationship; I suppose because they worry about who will be there for me when they are gone.

I confess I do, too, and some days just desperately want someone to hold my hand and stroke my hair and tell me it will all be OK.

On a practical level, my work and finances have suffered hugely.

I turn jobs down that take me away from home, I can’t commit to long-term projects because I simply do not know where I might need to be a month down the line. And psychologically, it’s hard going.

My concentration is shot, and when I do manage to knuckle down to work, I am constantly waiting for the phone to ring.

My poor son occasionally bears the brunt when it all gets too much, when I come home in tears feeling helpless about being able to make things a bit better.

The truth is, beyond being there and trying to jolly them along, there is nothing I can do.

But it’s hard to stay jolly when my mother asks me, “Why can’t they just give him some different drugs to sort it out?” and I have to tell her there are none. He’s not going to get better.

It’s even harder when I can’t meet my dad’s eyes while we’re in conversation because I know he is embarrassed, ashamed and emasculated by me seeing the state he is in.

And despite around 2.4 million adults making up Britain’s sandwich generation, I am the only person among my friends currently in this position.

This in itself makes it pretty isolating – there are a couple of people I can be honest with and tell them the full horror of the situation, but in the main, anyone asking after my parents get a ‘they’re fine, thank you’ response.

In fact, even between the three of us – myself and my parents – ‘honest’ conversations are few and far between.

My mother once tearfully asked me what would happen to my dad if anything happened to her. I couldn’t answer her, because it’s a scenario too horrible to contemplate. Indeed, ‘difficult’ conversations seem to be a real issue for people like me – recent research from the charity Independent Age found that the sandwich generation are just not ‘brave’ enough to talk to their parents about death, with 44% of those surveyed not feeling comfortable with it largely because they didn’t want to upset their parents (39%), or to make them feel their death was on the horizon (37%).

Of course, it’s not all doom and gloom; they are still my parents and sometimes we can still laugh and joke about the same silly things we have done for all my 44 years, and even the most horrible of scenarios can bring about gallows humour.

When my dad was told it was likely he would need to have his leg amputated, his reaction was a deadpan ‘Well, at least I’ll save money on shoes’.

But mainly, it is a draining, upsetting and all-consuming time, and realistically, it is only going to get worse.

Though obviously, I desperately don’t want it to end. 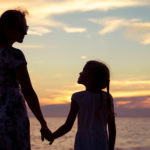 Scheenagh Harrington
I know exactly what kind of parent I want to be, but like most mums (and dads), there are times when it feels like...